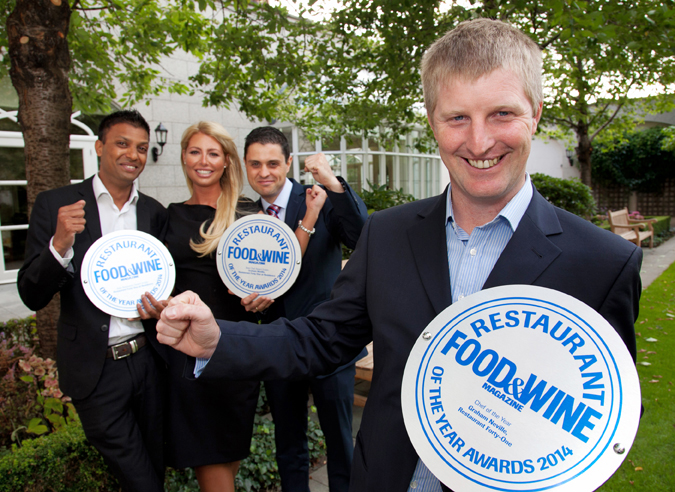 Graham Neville named FOOD&WINE Magazine Chef of the Year 2014, while Chapter One takes the title of FOOD&WINE Restaurant of the Year for a record sixth time

Chapter One took the accolade for Restaurant of the Year for a record sixth time, cementing its reputation as the epitome of fine dining in Ireland.

New to the line-up this year was the Entrepreneur Award, which recognises those entrepreneurs in the industry who are building exciting businesses that have contributed to Ireland’s overall restaurant landscape. John Farrell of 777, Super Miss Sue, Dillingers and The Butcher Grill, took the award for having built up a modern Dublin dining empire, taking influences from the States, Mexico and much further afield to bring new and exciting eateries to the capital.

Veronica Steele was inducted into the FOOD&WINE Magazine Hall of Fame in recognition for spearheading the modern Irish cheese movement by creating the first Irish farmhouse cheese, Milleens, almost 40 years ago. A pioneer, an icon and an inspiration, Veronica has forged a path for many in the artisan cheese industry, educating a new generation of cheesemakers who have gone on to gain worldwide status.

Commenting on the awards, Miriam Atkins, editor of FOOD&WINE Magazine said: “The judging panel had a difficult task this year, with so many incredible restaurants and chefs deserving recognition. However, there was no dispute that the title of Ireland’s best chef should be awarded to Graham Neville at Restaurant Forty One. Graham has transformed this elegant restaurant into one of Ireland’s premier dining spots with his own brand of creative, fun-loving and imaginative cooking. He epitomises the type of chef who makes the food the star of the show.”

“Findlater Wine & Spirit Group are delighted to be associated with such a prestigious event as the FOOD&WINE Restaurant of the Year Awards. We are fully committed to our mission to become ‘supplier of choice’ to the on trade through our unrivalled focus on service, quality and wine expertise. Pursuit of excellence is very much part of our philosophy and, as these awards are all about recognising and rewarding excellence, they were a natural fit for us,” said Michael Foley, marketing director, Findlater Wine & Spirit Group.

The awards, now in their 14th year, are considered one of the most prestigious and authoritative culinary awards in the Irish calendar.

The national awards for Overall Best Chef and Overall Best Restaurant are put through a further judging process, whereby the entire judging panel and all previous panel members vote electronically and in private to ensure a measured choice for these important awards. 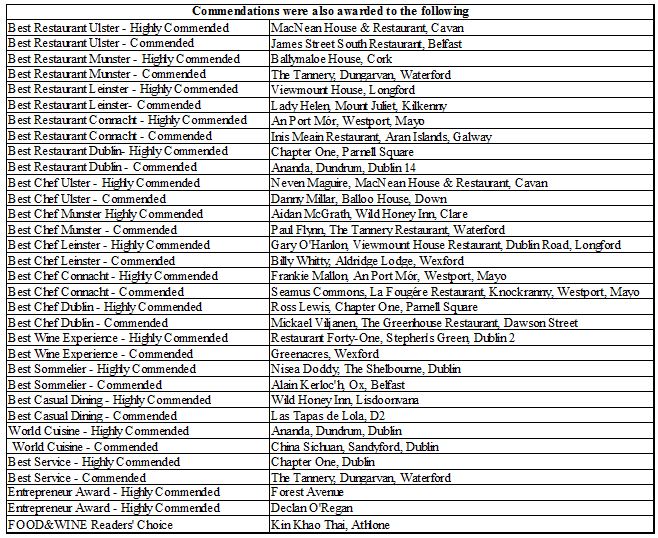